We were born to run 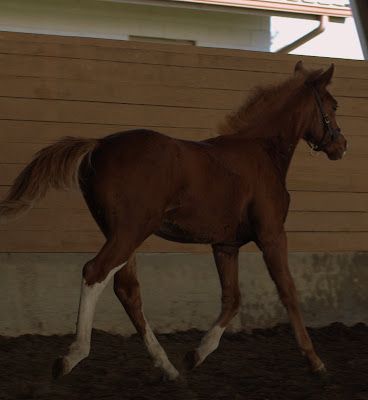 The small boy had visitors this week. The boy's mum, who hasn't seen him since he left the other farm, stopped by and admired.

Sincere performed all pony tricks for his visitor. Going up the big hill, going between the hay rolls, over the log and tarps and tapping his legs up.

He was so much fun and easy.

Did I mention easy? Short of fetching a stick he did everything without fuss. You can't ask more than that.

He was cheating a bit on his circles, but it was easily solved by pushing the rope at him.

Talked briefly to a few friends about his schedule next year. I don't know, but I would like to hit up one maybe two shows, and just get him out on the grounds. But first-- he needs to get into the trailer. Which should be easier after what we've been working on.

Today we also got official stuff in the mail from Arabian Horse Association. He's officially registered as half arabian, completely cool certificate and all. Onward and upward with Performance Horse Association, USEF and USDF as soon as holiday cash rolls in.

Need to pick up various supplies at Brumfields soon.

Also forgot that December is almost here. November's recap of the goals:
-Relaxation
Check. way more relaxed now than at the end of the month. Endo Tapping has helped greatly.
-Leading
Check. I can pretty much get him almost anywhere now. Very little resistance.
-Learning to be in a stall
We started putting him in a stall last week, has accepted it readily, but still kind of distracted.
-Tying
He ground ties, however, haven't had the opportunity to be in the grooming stall for various periods of time. We'll have to revisit this.

December's:
-Trailer loading
-Tying
-Stall time (something tells me he'll winter in one)
-Arena (which really ties into relaxing).
Posted by Kelly at 8:56 PM

He better not get any bigger. He won't fit under my bed anymore.

I think your greyhound needs to move over on the couch;-) He's a potato now.