It's been well over a week since Sincere has arrived and I'm wondering, did the manual get lost in the mix and did he even bother reading it in the last 11 months?

Where most foals cling to mum's side for the first three weeks and regularly give hell about various things, he's already independently socializing over the fence, leading by himself, picking up his feet, enjoys his grooming sessions, has had fly masks on, lead ropes around his belly and feet, doesn't like following his mother and is seemingly much more mentally advanced and accepting than his age group.

It doesn't mean he's not without fault, the little bugger still is slightly resistant about being caught.

It also means it always so positive, while he is still impressionable, I'd rather not turn him into an over-sized dog. He is a horse, he still needs to be one. But still, he's meeting and exceeding almost every expectation. Now if the size fairy comes, and keeps him small(er)... even better.

Speaking phenotype, I still get the occasional comment about the breeding along the lines of 'why would you out cross for a half-bred when you can get a purebred?'

Long of the short is this: I want what I wanted. I took two individuals, accessed their strengths and weaknesses and what each brought to the table, put the hypothetical in a range and then put it in action. I put what I wanted out of the breeding (hey it is MY choice), did my homework and I happened to get what I wanted out of this cross, perhaps a bit more. I can go into further depth and breadth, but frankly, I don't want to and don't have to. All I can say the proof will eventually be in the pudding.

Sinari rode well today, despite being snarky in the neck to the left, we worked hard with Sharon on haunches in, half halts and little short steps. When Sinari gets tired she steam rolls. She can have large gaits, and definitely can trot for a ten, but when exaustion hits, there is no half halt there is just go. We addressed that and a bit more today, and will be playing on that more in the coming weeks.

Definitely should be primed for the Poulin clinic and the NDPC in the coming weeks.
Posted by Kelly at 2:04 PM No comments:

Now your world is way too fast

It's been a whirlwind week out here, so I apologise for not updating more about Sincere, Sinari or the rest of the crew.

Most of the week was spent in recovery for myself. After not having much self-time, I imploded, I went hermit for most of the week attempting to get sleep and bits of extra work done. In reality I didn't get either, so it was a wash all around.

Between rounds, I got to scribe at the local show, gained a ton of perspective sitting with the FEI judge at B of what separates a good FEI ride from the bad. Also felt really privileged to sit in with them during the FEI young horse tests to see what they look for at each stage of development.

Sinari had four days off between all the hoopla, and we're paying for it through catch up. Changed her diet a little bit, adding in KER's electrolytes to help with the ruddy warm weather for the next few months.

She's doing well overall, offering clean changes, but locking on the left rein hard, doesn't feel like she wants to carry herself all the way through. The steering also feels off, so back to doing deep bend and straight work.

Today we went out conditioning out in the rolling 20-something acre field in the back. Probably not the best of ideas, but I really just wanted her to go out. She wasn't comfortable with the notion (only been back there one other time), the ground wasn't up to par and was too quick the entire time, wasting too much energy on not on the work but carrying on. But I think going out did her good in the end. Tomorrow is lesson day.

Sincere on the other hand has been having a never ending procession of visitors since his arrival. His human family has stopped in many times to see what's up.

For being only in the world for a week, he's a quick learner. Aside from being caught and haltered, he was bathed for the first time, picks up all four hooves, has had a lead rope around his belly (think girth), can be touched anywhere, has been taught to back up, go forward, lead, gone on his first trailer ride and has been adventurously departing from mum's side regularly.

His mother of course, is deeply unamused.

Speaking of his mother, May is doing well, settled into the new digs without fuss.

However has lost weight because of lactation. Normally with any other mare this wouldn't be an issue, up the grain ration and forage. But she's already on really good forage, but is ultra-particular about the grain. One minute she's chowing down, the next she's ignoring it. It's a never ending guess game with her.

I'm talking to McCauleys about this. I think their solution is going to be the 14 or 16 percent textured, four to six pounds a day. I'll also probably do soaked cubes to help get more forage in her and the all purpose calorie count of Equine One (Purina).

Not a cheap diet, but with McCauleys, the product is vastly superior to anything else. Sinari has been on their stuff for the past half-year, and there is such a vast improvement in everything health wise. Plus they're honest and will recommend other brands if theirs don't suit. Which speaks volumes.

All in all though, everything is on the level. Poulin clinic next month, doing some barn improvements and NDPC not far behind. It's getting busy quick.
Posted by Kelly at 7:22 PM No comments: 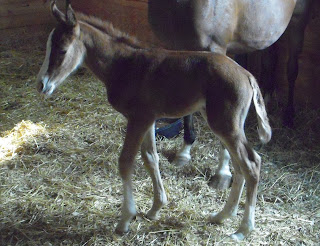 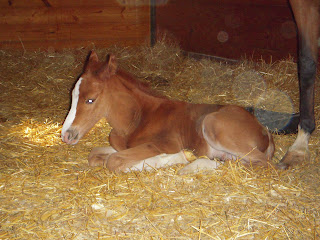 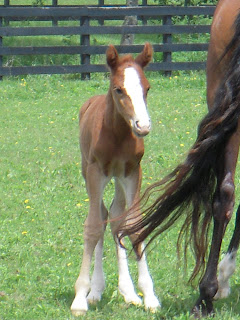 "Until one has loved an animal, a part of one's soul remains unawakened."
Anatole France

After a drama fueled week of ups and downs, the pinnacle of it came yesterday evening.

A perfect young man was born without complication and opinionated. A leggy chestnut, with a fat blaze, three high white stockings. Miniature Farbenfroh.

Right now everyone is tired and we still have a while to go.

Pictures to follow very soon.
Posted by Kelly at 6:40 PM No comments:

You think waiting for a foal would inspire more posts, but strangely, my time has been really occupied with other things to do.

If you haven't guessed: no baby yet.

Despite weather change, moon waxing and waning, sunken hips, loose vulva lips and a bunch of other things, no four-footed addition yet. It's giving me and everyone else fits.

So we're still sitting around watching, trying to figure out how to entertain myself during the wait. Namely it involves a very thick book, editing and many other ventures.

Thankfully, Sinari is there to keep me from going 100 percent bonkers.

Sinari has had good days and bad days this week. Being in flaming heat, she's distracted but not naughty.

Her work is coming along quickly, we experimented with more baby half steps, worked more half pass from various angles and gaits. Good at the walk, alright at the trot, not happening at the canter quite yet. Zero half halt probably because of the humidity and the fact her mind is also on reproducing with the stallion across the way.

I've begun shopping for a medium-sized bucket of Summer Games by KER. It's the only electrolyte that I know of that doesn't really offset their calium/potassium balance and isn't straight sugar. Plus it's a local company who I can go to and ask the usual rounds of questions.

With all the training, I've been debating about the next show, the Majestic in June. I'm not even sure I want to go, waiting to spend the extra dollars on the NDPC and Cinci Traditions to finish off my one remaining second level score and move on to third at the end of the year. This will give us time to clean up the changes, half pass and turn on the haunch without pressuring her too much.

Otherwise, it's been quiet, uneventful type of week that dragged on indefinately. It will probably be the same NEXT week as well.
Posted by Kelly at 1:58 PM 1 comment:

Watching mares is a frustrating job.

One day it's all systems go, and the next hour it's wait and see. But beyond the frustration and the anticipation is the amusement.

The foal is incredibly active and as a few people say, is a pisser. It gives May hell every chance it gets. Why she holds onto it at this stage of the game, is beyond me. However, it's amusing to watch it shift about, lay left or right, push and tumble about. I have a feeling it will be a bouncing bundle of something.

Looking at May's behavior, I have a feeling she'll sneak the foal. She likes quiet times on the farm, and being the consummate southern matron will lay down minutes after everyone has left. She isn't an aloof mare, she willingly shares space and seeks out humans, but she is seeking out a time for herself. I think it will be born, about a week from now, in late afternoon to early evening when there are one, maybe two people on the property.

Sinari is working under tack wonderfully. Between yesterday and today, we worked seriously on straightness. With the reminder of that work, the changes came clean again, the half pass work cleared up and she's overall more fluid. Today is her lesson, tomorrow I'll gallop out if the weather is alright. She's due for a trim.
Posted by Kelly at 7:32 PM No comments: