Mountain at my gate

Summers are a balance between financials and goals.

On one hand you have the pursuit of goals, hours are spent at home riding, plotting, planning from early in the year.

On the other hand your wallet screams in pain at every rip of the check book when the vet, farrier, coach, voodoo priestess, nomination, registration, show/clinic entry comes along.

It's a nice relationship. They play, I pay.

My team and I have started a little later for our qualifiers, and this year the big goal is the USEF Four Year Old Finals in August.

The calendar year for qualifying is short, and not every show counts for scores. There is only one qualifying class in the entire show and you need two scores, preferably three.

On top of this you have to count for growth spurts, horses doing stupid things to themselves, weather, crazy judge panels and a few other things.

I'm also notoriously choosy about shows. Having been to the majority of grounds in the U.S., I know what I like and what I don't like. I also know since it's my money that I'm bleeding I get to make that decision.

Our first qualifier is later than expected, Kentucky was a nice stepping stone but with young horses and KHP you never know what you're going to bring out. We were lucky that it went well on a basic level for materiale.

Two weeks later there was another semi local qualifier that we passed on due to footing, panel and prep time.

Instead, we traveled to Tryon over Majestic (six hour drive versus an hour) for better footing and a better panel. It's also the last score Fahrenheit needs for HOY materiale.

The facility, which is new, is beautiful. You cannot really want for anything out there. The stalls are

great, matted, with fans. They lead out directly to the arenas. There is a dedicated horse path that takes you around the property and there are shaded wash racks. Live scoring, shopping, restaurants  and accommodation on site. If you live locally, you can haul in and out and work off the trailer for the day. It makes showing much more easy.

They're still expanding. A new covered arena is developing, the cross country course for AECs is finalizing. You can see direction and joyfully, logic, for competitors and spectators.

The show itself for us was a mixed bag. The first day was brilliant, Fahrenheit scored beyond expectations, a 79,9 with a giddy judge panel that confirmed what we've always known- he's a horse with a stellar future. They gave us things to work on.

The materiale was better but, the score wasn't reflected, we still out scored the other horse by a solid 10 percentage points, but it brought our average down. Sitting second in the nation isn't such a bad thing especially given who is leading.

The next day we were all exhausted. Between running around getting the truck fixed on the road, showing, socializing, strange beds all week (I shifted houses since my air conditioning broke and it was 100 degree heat index) and scheduling things, we made a calculated error in over warming him up. He lost the electric sparkle but still put in an obedient, quality test for a middle of the pack placing with a fair yet tough international panel. Impressively he still scored a 7,9 on the canter work.

We are a bit bummed by not achieving that one goal this year, but really at the end of the day it's about producing an FEI horse. He will easily be that.

Also in perspective we achieved something in 90 days of work (you're average horse has had about a year of under saddle time doing this program and has at least three shows already this year) that stood up to a good standard, it was a positive experience for him and for us and we're into our second year of producing from gate to arena.

We're thrilled about the initial successes and what's coming down the pike, we got home safe, and the horse had a positive experience. You can't ask for much more.

Perhaps then it's a bit ironic and bittersweet that because we do so well in developing, that they sell well.

It was exactly three days after the show, that a professional came in looking for her next Grand Prix horse and scooped him up. It's an excellent match, and she clearly adores him and will do a fabulous job and we're excited and pleased.

But it means, as usual that we begin again. It's the nature of sales and young horses that we always start over and there is a lack of permanence in the barn. But we're not for wanting, there are two new horses coming in, one sales, one long term horse, and my breeders are breeding or buying more with their now consistent income from the work from my team.

Flair is still being aimed for Fall shows and the IBOP, so I'm not without a ride. However, the barn will feel a little emptier and a bit more quiet that the goofy German chestnut is gone.
Posted by Kelly at 4:20 AM 6 comments:

I spent a lot of nights on the run 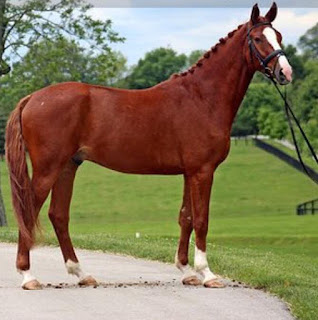 It's been a few months since an update happened here.

It's not because there isn't anything going on, it's actually the opposite. Myself and my team have been busy, and to the point where I just didn't have time to update.

Spring is here, and that means a lot of things in this region. It mostly means that we've stepped up to a full week of training, that foals are being born, dams are being rebred, horses are being sold, and the rigs remained fully hitched to go places.

It's been a lovely blur.

May we started back out showing.

First up was the Spy Coast Young Horse Series, a show that I've come to love and really appreciate as a relaxed starter for my guys. We brought everyone out except Flair (who aged out of contention this year), and came away with qualified horses, ribbons, highpoint and cash.

We then turned to Kentucky Dressage Association's Annual.

This has been a staple in the community for 30 years, and I occasionally come to play there. It's my way of catching up with people, saying hello, and getting to sleep in my own bed at the end of the day, which if you travel the circuit, you come to really appreciate.

It's not my favorite to bring untested young horses out since the atmosphere can be too intimidating, but we took Fahrenheit out for just a materiale class.

The problem is that both Mike and I couldn't ride. Mike had to have some unexpected time off (he's fine), and my allergies had become so bad I had to carry an epipen incase I went into some weird attack or had a reaction to whatever happened to be in the air.

So, I asked a favor and got a nice junior rider to pilot him instead. With four rides, he confidently put

out a great result (78,9 and 81,5), and handled everything that the Kentucky Horse Park threw at him.    We're now focused on USEF Four Year Old Qualifiers at Tryon, Dressage at Lexington and a sale.

Then there's Flair, who has become savant-like with work. On great days, she gives you changes (right to left is fab, left to right is... interpretive), piaffe/passage work, working pirouettes, walk pirouettes, super lateral work; and on the bad days well... the walls take a beating.

She went in front of JJ in April and we've been taking semi regularly lessons off the farm.  It's been a tremendous amount of help in developing her since it's been a bit of time since my last young horse and my expectations have undoubtably changed.

But putting it in perspective is that she's only been under tack for a grand total of a year. She's vastly

changed from the Alberta Brown Cow to a lovely, modern sport horse.

This year she has IBOP on the menu and I would really like to get her out at third if we can get our acts together.

My contacts in Germany are already looking at another young horse to come in, I have another client wanting to breed mares, and then there's another partnership in the works with another nice, young, horse, which will be sorted as soon as everything else gets sorted out.

As for the rest of the year, Tryon will play a pivotal role as to if we pursue the rest of the Young Horse classes, or if we go more for the HOY items. Then there's the year end things of Inspection and Keuring, with no less than two or three to attend to in the fall, and the fall clinic schedule to host.
Posted by Kelly at 6:43 AM 1 comment: