It's getting cold, and the days are growing shorter, and I'm retreating back into my indoor more and more these days with the odd gallop out on the crisp, indian summer afternoons.

The season is over and I'm breathing a temporary sigh of relief until December when we begin all over again. This temporary sigh includes remastering the freestyle, redoing a few websites and getting through second level.

Not to mention catering to my "real life". You know, significant other, potentially going back to school and J-O-B.

No one said being an amateur was easy, no one said the sport was a cake walk either.

Don't get me wrong, I love to compete. It brings something different to the table every year. But by Regionals time though, I'm ready to call it a done deal. This year wasn't any exception. I competed two under saddle for the first time, next year I might have three to four at various levels.

It also leads me to re-assess my goals. Everyone has a laundry list of stuff that they would like to accomplish short and long term, and I'm no exception.

Then there are the lofty, perhaps unattainable, such as going after the Brentina Cup. Yes. I said it. I have the odd ambition to qualify for the Young Adult class. I know, I have sucker for punishment written all over me.

Unfortunately, due to rules, I can't qualify with the pony (no ponies or mules allowed) and I don't have a Grand Prix (or I2) horse. So I have a stick horse's chance in a fire so far.

Compounding the problem: you need to qualify via three (3) competitions with an average of 62 percent or better, and I think they need to be CIC* or larger. Luckily, there are two in my area, Paxton and Kentucky Dressage Association. The third international would be in Lamplight, a solid EIGHT HOURS away.

Like I said, it's a huge reach, but for some reason my crazy ambitions have a way of turning out.
Posted by Kelly at 6:32 PM No comments: 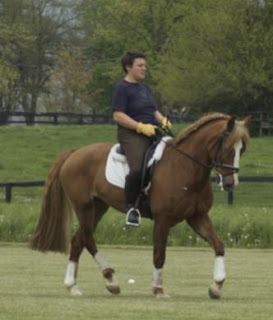 Actually a huge one and I'm fairly particular about what I use. You see, I wrote in my Xanga account for YEARS (almost four I believe), and I've recently come to really not like the layout, formatting and the beyond basic services.

My name is Kelly Gage, I'm an Editor, a writer, a web designer/content developer, Head of Marketing and above all-- a dressage rider.

Despite riding ala Amateur status, I'm pretty damn serious and my ponies. I ride six days a week, rain, sleet, snow or shine. I train with some pretty cool people and have the support of some of the best and brightest in their world.

And the ponies? Far from typical too.

There's Sinari, who is a '99 model welsh cob mare (pictured above), who I've been owned by since she was four. Extremely clever, handy and intelligent, she's my top horse at 14.1 hands. She's schooling straight through third, with fourth thrown in there. Recently showed second with the goal towards earning bronze by next year. Currently learning piaffe, passage and cleaning up the changes.

Then there's Bella, a silver-rated haflinger mare standing at 15.0 hands (owned by Deer Haven Farm). She's a willful tank of blond fluff, just starting her career and lucky to have the ride on her. But despite being green-- she's moving fast and tries extremely hard. She's a solid training level right now with learning first. Super comfortable mare. She should be debuing in spring.

Together we make a team, and this blog is about their progression.
Posted by Kelly at 6:06 PM No comments: