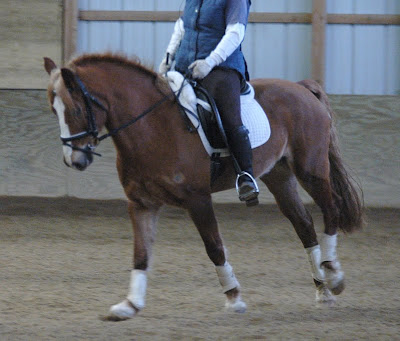 It's been a really productive and exciting week with Sinari.

While the weather has been cooperating with us, we've been progressing pretty far and fast.

It's the perk of having only one to concentrate on. The down fall is I'm looking like my Thanksgiving supper, overstuffed.  Time to hit the gym.

But first the recap:

Sunday and Monday we took off again from work. Scheduling is still being a pest on this one, but I think I finally got it under control.

Tuesday was crisp and just about perfect to go galloping on the mile loop. We opened up the conditioning route with a brisk walk for the first quarter and then a slow canter, putting emphasis on not changing the speed or the rhythm despite the rolling terrain.

We went back to the arena for the rest of the week at various lengths. Somedays, I work twenty minutes and other days, it's pushing 45 and also in various outlines. Depends on what needs to be accomplished and what is being offered that day. But ultimately, I just want her to feel good in the work.

In that work is getting the solid extensions, working through multiple changes, variations of the half pass, passage (out of the mediums), the zig-zag and the new fun trick- pirouettes (still pales to piaffe, but still ultra fun to ride).

The cherry on the cake was schooling 3/4's of the PSG (not in any particular order). Minus tempi's. Tempi's aren't our strong suit yet, but we did accidentally obtain them last week. I'm kinda looking forward to accidentally getting them again soon.

But in running through bits and pieces of it, I feel we'll be along those lines soon enough. It's just a matter of obtaining tempi's and more strength.

We also presented formally in the double to our coach.

I've been riding in the double bridle on and off for a month. It's usually once a week towards the back half of the work week. Some of he work has been serious, and some of it has just been goofing off in it.

For those who haven't ridden in it, it's a different kind of work. I have at least three times the pony in it and we're capable of doing that much more work. At one point or another, I wanted a horse that could go FEI in a snaffle. Call it a point of pride, but there's a lot to be said about doing most of your work with simplicity.

I didn't want to fiddle with the double, heck, I didn't want to wear spurs either. Its because that we've been going in the double, she's more responsive in the snaffle and has more energy. It's because I have spurs on I don't nag. For her, she want clear, defined communication.

However, there is a learning curve. When I presented that day, I learned I cannot take equal contact on the curb and snaffle. That I'll get used to hearing that as well. And all that leather. Oy.

On tap for next week is upping her time in the double, getting a more confirmed piaffe, possibly working over poles to help with the passage, work the pir's and more half pass and passade.
Posted by Kelly at 3:52 PM