She moves in mysterious ways. 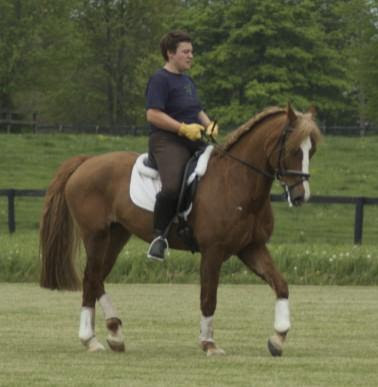 It was an interrupted week at best with uncooperative weather.

It wasn't anyone's fault for the interruptions, I needed to go to physical therapy and the timing on some of the rides were just late or off.

For the better part, we were stuck indoors.  Which sucks, because it was sunny outside for two days (but the footing was soggy).

We worked on a number of exercises, but the one thing that's bothered me is the changes. Lately she's been fumbling them, ignoring the aid during the later half of the session.

I think it's a combination of things.  First, she working twice as hard now that the connection has been solidified since she's been in the double, so she's tiring that much more.  Secondly, the new footing is deep, which again is making her stick a bit in some different areas and finally, I think the arena probably feels a little claustrophobic to her, it's also a similar case in the extensions.

So I'm leaving the subject for awhile (or at least until I can get back outside) to concentrate on other things.

Like shoring up those extensions, make the passage more passage-y, to collection and working on some variants of shoulder and haunches in. There's also a chance to work over some cavaletti to help with a lot of this and break up the routine.

Despite being stuck with the changes, there were a lot of highlights.

Half pass is getting stronger, however, we need to slow the canter down and make it more lateral. I put the piaffe more on the spot by making it into a pirouette. She's quicker to change gaits in the lateral work as well. She did a full test zig-zag at the walk with no issues as well.

So the goals this week, despite facing another interrupted week are to clean up the transitions, work more elements of the PSG (possible string a few together, try those exercises Steffan Peters outlined in December's Dressage Today, go outside and gallop a little more and just make it fun again.
Posted by Kelly at 5:21 PM

Bodhi seems to have the same issue of claustrophobia in changes though maybe it is me instead? It is always a good plan to leave the issue alone for a bit though. I am always surprised on how the issues sometimes just fix themselves. I like your idea of riding in the snaffle to keep yourself honest. It is also great for the horse to be able to respond to the different forms of pressure from the two bits.

Most likely it's a green issue, and trying to figure it out. How I initially introduced them was out in the field. This is the first time I'm asking for the consistently for the indoor (deep footing and walls), outdoors, still can get pseudo tempi's.