Diamonds on the soles of her shoes 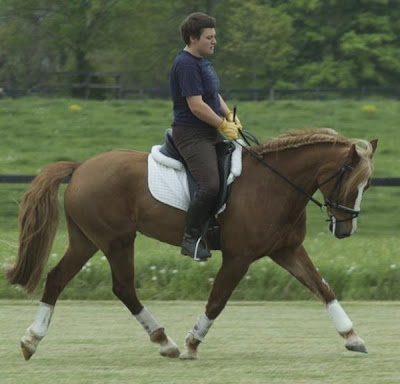 Despite being thankful for a holiday, I'm not really thankful for the obligation which interrupted my life. Although, the pony wouldn't object. She got her holiday meal of soaked alfalfa and grain, feels quite refreshed from the cold weather and time off.

Riding took a back seat to holiday eating. We rode a grand total of two times this week, took Wednesday through Friday off and resumed today on the ground.

Felt limited due to weather. We were regulated to the indoor up until today.


We namely worked on reactions.

The first day, I got the bright idea of schooling center line canter to halts and back to canter. Never mind I haven't worked on this line forever, nor have I particularly schooled transitions. It wasn't so smooth. Think more like performing crash landings and hi-ho silver impressions. Part of this was my fault, where I wasn't preparing, and even if we landed we landed crooked. But, we muddled through, and whenever I laid the word whoa down, it was a screeching halt.

The next day was better, we weren't able to work on lateral work, but took the chapter from December's Dressage Today's article from Steffen Peters and cleaned up the in and out portion of the extension and mediums and collection itself. This was fun testing how quick I could get a reaction out of the transition. The trot work was a little strong, but the canter work was very nice, getting three's and eventually four steps back and fourth. Sinari sustained much longer, and was more engaged through this instead of just doing collection or just doing mediums. It will probably be added to the routine fairly regularly.

Today though, we worked on the ground, I wanted her to have a stretch day with the flexibility to work on half steps and mediums. She worked out great, and I'll get back on tomorrow. I have a new bag of exercises I want to try out.

December's goals:
Three on the spot steps of piaffe
Clean changes when asked for
Lateral work
Relaxation
Condition
Posted by Kelly at 8:28 PM

I love the picture, you guys are so gorgeous together =)

I've been having so much fun reading about your progress while I'm not making any. I've given Sora the winter off because it seems like each day I go out to see her a different end is higher than the other ;D

Glad you had a wonderful Thanksgiving.

It's actually a photo from last year, this year I haven't had anyone to really photograph us.

Totally understand about the winter. But somedays you just need to get on. We went through spurts and moments where I began to wonder who replaced her with a cutting horse. Still got on and rechecked the basics.