On and on we go 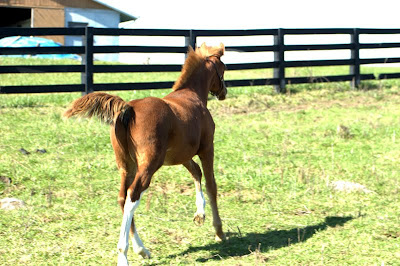 The little boy is growing up.

The last few weeks he's been stubborn about leading. Backing up, carrying on about not wanting to leave the herd.

The plant and freeze is highly annoying to begin with. The backing up is worse.

Being forward, is more than important to me. It's a concept that he cannot ever say no to.

When he was weaned, we started going farther. We started exploring the inside of the barn and more of the surrounding fields.

When May left we started going to the barn.

Being nervous he ate his way through his mash in the wash stall, and nearly freaked at the sprinkler in the adjacent arena on the first day. He still occasionally trips over the back of my heels. The subsequent days he was fine about the wash stall and walking in and out of the barn.

This past week though we had one bout, and the rest of the time outside was ultimately pleasant. He went from having breaks to having none sometimes. So now, he's learning to chill and maybe reinstalling some breaks.

November's goals:
-Relaxation
-Leading
-Learning to be in a stall
-Tying
Posted by Kelly at 7:25 PM

such a nice looking guy, I love his stockings :)