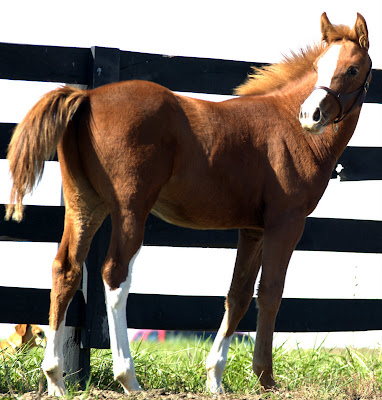 The little man continues to grow.

So much so his figure eight halter, the one that was uber-large and hanging off his nose when he was six hours old, was so tight at six months that it began rubbing is nose raw.

I found an old halter that will do as an in between, but really needs the crown replaced.

His mind is growing as well. This week we worked on a variety of things, making the stable into his schoolroom.

When we got out of the field, he is still a little hesitant about going in the barn, especially at the new entrance (hey, we don't go in there we go out!)

We started by feeding in the stall. He's still more interested in getting out, but at the same time, the emotional eater in him can't ignore food. Plus it sets up routine.

In the end, he was great.

In the stall, we worked on tying, grooming and getting out of my space. On the side I worked on stopping and going. It's easier in he stall than it is outside, less distractions.

Tapping him in the stall is easier as well, he worked on relaxing/stretching and learning to independently pick up his legs by just tapping on them. A helpful idea to get piaffe/passage down the pike.

Shortly after we lead to the grooming stall where he's learning to stand in a busy environment, challenge for the young man. But despite being fidgety- he tried to do well. We left there quickly and tackled the tarp.

In the last session I set up a tarp and log exercise. Goal was not to get overly excited about it (or run away or jump on me or barge), and get him to walk over the log at different points/heights. This was accomplished pretty readily last week.

This week we repeated by walking on the tarp, over the log, both directions with the added bonus of setting up for the triangle.

To the left he was great. Did everything including stepping over the largest part of the log.

To the right, we are unpracticed. It took him several attempts at turning around before he got the message that going right, leading right, and moving off to the right is just as important as going to the left (it also shows how uncoordinated I am). Eventually he got it, and we went on successfully conclude standing up for conformation, which he's whip smart about.

Personally, I think he enjoys the attention and I think he'll definitely shine in an arena like that

This week, I don't know what our session will be due to holiday, but I'm going to try some different conceptual exercises for him such as lay down and bow. It would be a low-impact way to strengthen the muscles and add another fun thing to work on .

Added news: we're officially registered with Arabian Horse Association. Will be sending in the Performance Horse Registry/USEF stuff soon too.
Posted by Kelly at 6:29 PM