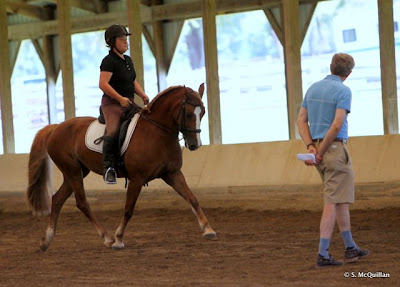 I've been holding off on this post for a little while now for a few reasons.

First, and mostly, there's been a lot on the plate. The clinic was a massive success, beyond what I had expected for the results, quality and turnout. Christoph is a clinician worth attending and riding with. Even as organizer, I want to ride with him as many times as I can. We're booking for next year.

Sinari was beyond cool for this and despite having the screws thrown at her in horribly hot weather and by the end of the first day she was sitting more like an I2 horse than a 3rd pushing PSG. When she got it right, she was truly impressive and I think she showed the glimmer for the future.

Our clinic was over for us after day one, I came in Sunday when I found Sinari more that just lame. Our theory is that late Saturday, early Sunday she became cast in the stall. While she got herself out of it, she had huge amounts of swelling on the right side. Thankfully nothing broken, nothing strained. In short, shit happens, and occasionally it happens in the least convenient moment.

A quick call to the vet, lots of reassurances to everyone and multiple things later we were bandaged up and retired out for the day. But admittedly, it was a lonely ride home.

Fast forward to today, we're almost out of the woods. Sinari has progressed phenomenally. We'll be off the major drugs tomorrow and the standing wraps.

If we're lucky, should be back in the saddle in the next coming weeks.

I wish all my pony peeps best of luck at the Pony Cup this year, I heard the fields were pretty light, probably a reflection of the recovering economy. If everything works out this year, we'll be back up there.
Posted by Kelly at 7:30 PM