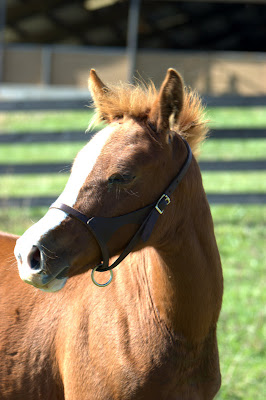 I played hooky from work on Friday so I could catch some late shut eye and attend to what I needed to attend to. In reality, I accomplished very little, and relaxed much.

I also realized that Dressage Pony has passed it's one year mark yesterday with 14 most cool followers and a bunch of other cool things. We're a front page Google search status for dressage ponies. We've received hits from far away as Australia and close as my town. I have email from all over.

I'm chuffed for all the support, it really means a lot. It's connected me to the world far more than I expected. I enjoy hearing from people who post comments here and their experiences. I love reading their blogs and following their herds as well.

What will the future hold? I don't know. But the ponies and I are going full hilt forward and welcome anyone to come and join or follow the team.

Speaking of relaxation. Sincere is learning to chill out and go forward.

We hit a stumbling block from last week. A left over that quickly manifested due to the quick change in weather.

While I thought he lead well, he has grown smarter and quicker. Not to mention larger. The little colt has quickly learned how to manipulate a situation to his favor and this needed to be nipped in the bud. He has two favorite tactics, the stop and plant; and go backwards.  The go backwards is one of my least favorites.

Leading is a fundamental requirement of any domesticated horse. It's one of my pet peeves when a horse cannot or will not be lead from the shoulder without fuss. So, we (meaning Giacomini and himself) addressed this issue in an effective manner: he learned to go forward through lateral work.

Unusual way to do it, but pulling a horse forward causes them to stop and lock, moving laterally however, allows them to mentally and physically unstick themselves.

From there he worked on a micro lunge session with someone who is far more experienced with foals. While Sincere resisted at first- he relaxed through insistence. When the session was over, he nearly loaded into the trailer, but could independently have his legs tapped and when asked, went yielded to the contact. When I took the shank over, I just lead him around to different points in the paddock.

He had minor blowups, which is to be expected for a baby, but with the new dialog in place, I could quickly resolve issues that cropped up. In between, he was stood up and tapped. He's trusting his relaxation much more now, and finding reward in not being so busy. It was pleasant to be on good grounds with him again.

Because of the messages I've received over Endo Tapping, what it is (not to be confused with Endo Spink's  TAP), what it does and how it relates to young horses, I've send word along to Giacomini, asking to tape sessions with young horses, the methodology behind doing this and what the long term effect with following this kind of scale.

I would like to hear further thoughts on this, especially from those who have bought into the NH/Lyons/Roberts stuff but found unable to apply it to their situations.

Tomorrow is the big day, he's weaned and May leaves. We shall see what happens.
Posted by Kelly at 9:21 PM

Good luck with the weaning, you have done so much preparation for it so hopefully it will be relatively smooth. I agree that problems on the lead are most annoying. Bodhi degrades into balking pretty frequently where we have to back to the basics of leading. Sometimes it can be frustrating. It is great you are taking the time to really solve all of you babies issues now, it will save you a lot of time in the future ;) Keep updating on the tapping technique. I have never heard of it and find it very interesting!