Life has officially returned to normal. After an extra two weeks, some rain, transportation bingo and a few other things, Sinari is home. 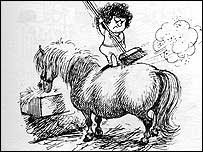 I was greeted by a dirty, disorganized barn and a loose horse.

The dirt was my fault the loose horse picked his way out of the stall.

I board in a tobacco barn with a dirt floor.

I actually like this place. Aside from the dirt, it's huge and airy. It feels like home. Normally the good fight against dirt, dust and various other things isn't an issue. You keep up with the work and it stays a bay.

But since I wasn't there, it overran itself. Not only that, what I thought I had organized, was messy.

I came home to my clean stall, dusty buckets, dusty trunk, dusty feed bags and dirt-encrusted fan and SmartPak bin. I had dirty pads collecting dirt and mold (how did that happen?), white rags that are brown and my wash kit upside down in the lower barn.

Then came Sinari. Who not only made a Thelwell pony look more turned out, but probably garnered a few WTF looks from fellow boarders whose sleek reining Quarters were just coming back from their futurity runs and mine was coming back from the all-you-can eat buffet.

To make matters worse even the vet said something.

To tell the truth, she went from a smooth lower 900, to chunk-tastic 1000. The pony is now sporting Jenny Craig as her sponsor and is putting on one hell of a guilt trip.

So I went on a mission. First, I spent the first two days seriously cleaning the barn.

I bought the gallon of bleach and anti bacterial dish soap to prove it.

I took down the summer gear, cleaned and stowed it for the winter. I gathered up the pads, raked, swept and wiped down. I still have to tackle my tack. Earlier I sent out all my blankets (ten plus of them) to the launder and they came back in neat plastic bags for this season and summer.

There's something soulful about an organized barn.

Then I broke out the clippers, the tranquilizers and my mandarin collar jacket and got down to business.

Thirty minutes later, with dirt and hair covering me, I have a fully clipped naked horse with skin funk. Tomorrow she'll get a full bath after going back to work. Promise to post naked pony photos.

I still need to hit up the Home Depot for a number of supplies.

Also- if anyone is in the Lexington area and needs clipping done, I'm game. As my motto goes:

they grow, I mow.