Go ahead and jump 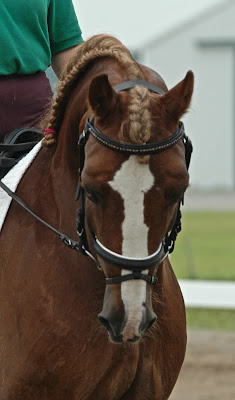 The weather had been on and off with Sinari all last week and we were forced, for the most part indoors.

Normally, I don't mind the indoor. It's one of the nicer ones in the area, however, they just re-laid the footing, which is ultra deep for a dressage person.

I don't mind deep footing, but she does. She can't really find purchase on it unless it's wet or just harrowed, she feels like she's swimming instead of striding. Lately, I have to keep an eye on her stifles when working on the surface, the left one seems a little warmer than the right lately and the last thing I want is pulled stifles.

Despite this she's working really well and keeping a fresh attitude towards the task at hand.

We cleaned up the half pass and the shoulder in on the right is coming along. She's confirmed in everything to the left including three more half steps. Her normally strong right side is pushing a little weaker, but when we commit to the line/exercise, she gets the point. We did working turn on the haunches with the neat turn quick two steps and straight exercises. We also went out on a fall hack during the prettiest days.  I really want to gallop out and go conditioning, but I figure walking, when the grass is a little slippery is far better.

In between, we're working on the freestyle stuff. And no, I'm not sharing that until my compilation is complete. And no, there's no Pirates of the Caribbean.

This week I want to clean up the straightness and ask for more collection. I would like to clean up more half pass at the canter, and if the weather's clear go on outside. I'm debating about working more in the double bridle, to get the feel of it and to see how she reacts to the different aid.
Posted by Kelly at 6:58 PM

I've already got all the music picked out for any possible freestyles just because I love that kind of stuff, comes from being a cellist I think!

I just found your blog...it sounds like things are going well! I'm going to be doing a lot of in hand work with my mare until I can ride again and I'm a bit worried by how deep the round pen's footing is. Hopefully isn't a big deal, but we'll see!

Kelly, I completely understand the sentiment. I also get really sick of that music that's been done to death. I have less experience with it in musical freestyle though, and more in orchestra concerts :) I sincerely hope never to have to play the score from Star Wars ever again (or the music from Lord of the Rings lol)