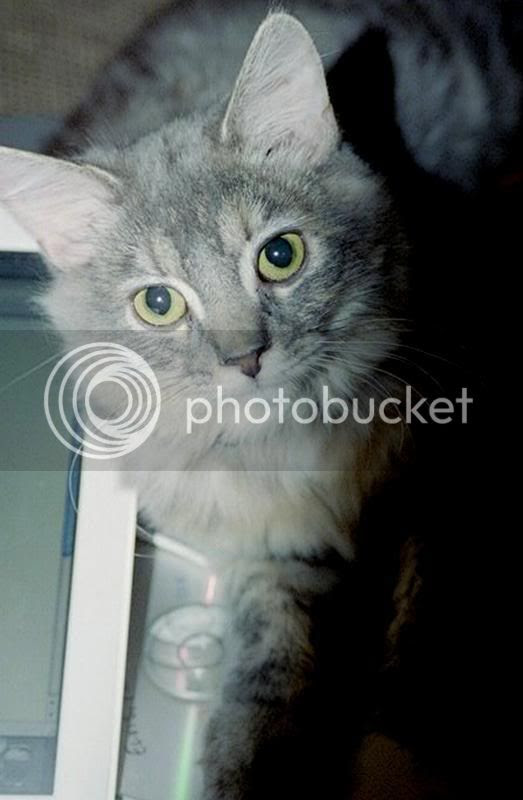 Ossie enjoys many things. Catnip, milk, chasing the occasional fly in the bay windows, swimming in a full bathtub of water and being just a-freaking-dorable are on the definite top list.

The problem with Ossie, aside occasionally using her cuteness for evil and occupying every empty box with her form, is that she's furry. Furry to the point of you pet and you look like you committed a personal sin kind of furry.

But despite brushing regularly, she still develops nasty weekly mats. Which I promptly had to cut out otherwise they would turn into large clumpy mats. She also clogged the bathtub a few times.

I was literally at my end, I was prepared to take a pair of clippers to her and give her the jungle clip. That is, until a last ditch tryout of a new brush and system for taming the long hair.

So, I plunked down forty bucks for the Furminator, and another twenty for a bottle for Cowboy Magic.

I've heard the claims that it will reduce shedding, furballs, hairy couches, speeds up shedding, healthier coat, does the hokey pokey and everything else under the sun.

Hefty investment that was partially underwritten by the boy's family who gave me a gift certificate to SmartPak for my 25th.


After it arrived I went to work on Ossie. No less than ten minutes later, I had a small pile of gray fur that was the size of a chinchilla on the coffee table. Twenty minutes later, alongside a very pissy cat, the pile was half her size. I rubbed her down with Cowboy Magic to help prevent more mats in case the product didn't deliver.

A week later, her coat looked less fluffy (in the good way), had more bloom and... zero mats where I brushed. She was also more active, and when you petted her, your hands were clean from the attempt.

This week's session concentrated on her tail and her hind legs, the worse of her areas. Again, ten minutes later, I had a Latino-rodent sized pile of fur and a pissy cat who was again doused in Cowboy Magic.

Needless to say, come spring time, I'll be ordering a bigger brush for the ponies.The Furminator delivers.
Posted by Kelly at 3:06 PM

Oh my YES, the Furminator works! I too have a fuzzy grey kitty, and she adores being brushed with it. My malamute isn't so fond of it, but holy cow can you get a ton of hair off of him! I've always wondered how Furminators work on horses...

Man I might need to look into one of those for my kitty!!