To the well once more 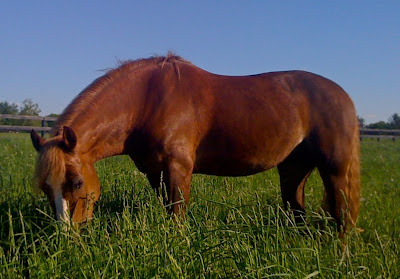 Between ark building exercises (it's rained that much), and acupuncture sessions, the pony is getting to be stronger.

But still, we've been put on the slow track of every-other-day work for the next two weeks.

It seems only appropriate considering that the change of weather has marked the start of summer.

Summer here is one long, slow day after another.

It's only reflective of plateau and ce la vie attitude that we've adopted.

It's too hot to do serious work until the mare has adjusted and the schedule has us set up where I don't feel that working beyond the basics is conducive to doing any of the upper level work. So, we've been out of the double and have been working exclusively in the snaffle.

This for me sucks.

I love riding in the double, and she does as well, but physically- it's a demanding piece of equipment and you can do a lot of harm alongside the development aspect. It's not like she goes just as nice in the snaffle as the double, it's just she recycles much better in it. I also like working five to six days consistently.

So for the week, I've regulated us to the down, round and low; lateral work and transitions. Cleaning up and solidifying what we know while waiting in the wings to get back on track.


Meanwhile, grass growing season is here. As you can see above, Sinari has begun to take advantage the long, lazy days and making hay while the sun shines.
Posted by Kelly at 7:17 PM