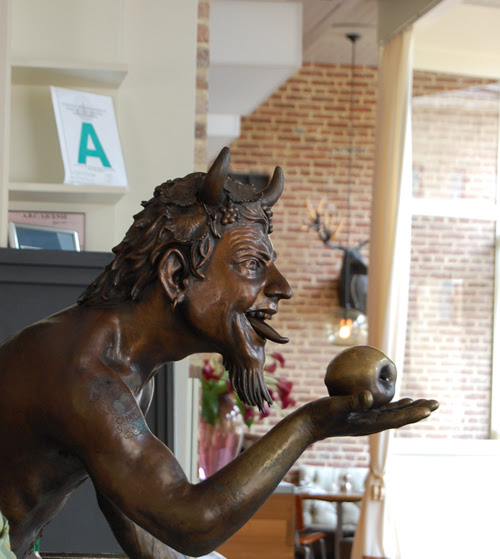 This week has been a little wonky. With time (and weather being out of sorts) being under a huge crunch, I only stepped in the stirrups every other day.

Friday, we went out for a "bend and send" set. After warm up we immediately hit the canter and did extensions up and down the polo field, then attempted multiple changes on a straight line.

After having a good lesson Saturday (can we say schooling pirouettes? Cleaning up the extension to collection?) and fiddling with Sincere, I was hauled out to one of the meccas of flat racing: Churchill Downs.

My first experience at Churchill was coming to the state in 2002. After initially looking at the pony that would be mine, we hauled over to CD to look at the empty track and visit the museum. It was cool, but you could definitely tell where the cameras weren't looking. I guess that's why I hold preference for the smaller tracks, such as Saratoga and Keeneland.

I attended my first live race there, Derby '05 (Giacomo's Derby). I was invited by the track vets and their crew for a large spread and good times. It was a great experience. But, hindsight, after seeing racing in England and the UK over difficult and fabulous courses, American racing seems like NASCAR and less about the test of the horse.

Fast forward four years, I'm back on the track during Belmont weekend. During that time CD finished it's renovation. I arrived in to a diverse mass of humanity with the boy and his family. It was a great day with the Good Times Mint Julep, a Grade III turf for fillies and mares, the simulcast for the Belmont and the rest were various allowances, claims, maiden specials. Treated to corporate box seats instead of a backside pass this time around, it was a much better overall time. Maybe it was the seats or the company or the fact that the racing industry is making an effort to clean up the not-so-great parts, but it was a good time.

After the Belmont, we booked it over to Proof on Main. It's a quirky little restaurant that doubles as a hotel and art house. It's an intimate atmosphere with a sense of humor. Complete with a life size bronze Pan sitting at the bar, red penguins, unique photos, one way glass urinal and an S&M decked out stag's head on the wall (you can barely see it behind the Pan).

After a hugely decadent, original meal, with fabulous wine (a quarto of Kung Fu Girl and a small flight of Ice Wine) and home made water melon cotton candy as the dinner mint we crawled home. I love Louisville.

Work resumed today, worked on the same things during the lesson yesterday and lead Sincere around the paddock. On the list of to do this week involves cleaning my tack (which has been neglected for a number of weeks), doing laundry, getting my entry in for NDPC and ordering a ton of feed.

Now if my bank account would behave, life would be even better.
Posted by Kelly at 12:12 PM