May and now most of June was just completely non-stop with sales, lessons, clinic planning, personal items and shows.  I may have gotten a day off, but I couldn't really tell you otherwise. 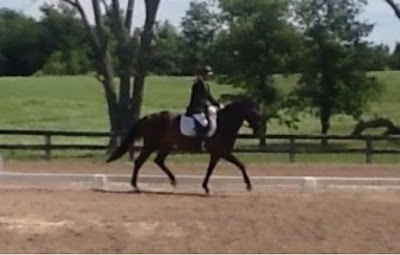 I finally got back to my desk in May and put together Ulf Moeller's details and sent out. I adore this clinic because it focuses exclusively on young and developing horses. It's also held at one of my favorite facilities, High Point Hanoverian in Maryland. Ulf, who is popular as a teacher is such an asset to have in the program, and finally I have a few horses to go in the arena with him. I also have a lovely local clinic with Elly Schobel on the books who I'm looking forward to hopefully having out regularly as well.

Both mares are excelling. It's so nice to be back in my regular grind. It feel different this year with the majority of my barn being under five, it's a low key situation that allows for breathing room to keep things light but progressive.

Haiku looks just wonderful. Even through young horse moments, she's proving to be mature, capable and very level headed. Which is unusual for the breeding between Jazz and Ferro. The mare is such a good egg. She rides three to four days a week currently and another lunges two to three. She's also had some time off from time to time to keep her mentaly fresh. Physically she's very fit for the age, and beyond what we're doing currently there isn't much we can do.

So it's just a focusing on how good we can make the basics. With Haiku it's easy to fall in love with her gaits. For a three year old, she's developed easy 8 gaits all the way. Her next outing is in August, a schooling show, a clinic and the IBOP, with schooling outings in July. I wanted June to focus on development.

But, while we're in it to do well in the young horse classes, the real goal for her, no matter with who she ends up, is the Grand Prix. 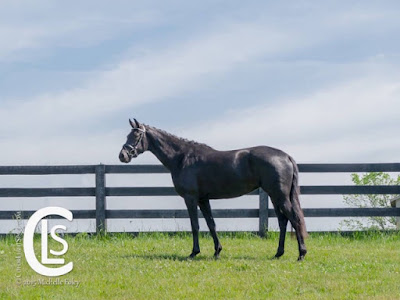 For now, we focus on the tedious details that will pay off in about eight years.

It's hard to think down the pike when your focusing on somedays getting through an awkward growth spurt.

It's days spent on the ground stretching or doing things under tack that just mind little details, like how straight we can make her on non-supported lines, how clean those transitions can get or how square the halt can be or can she really follow the connection where ever we put it. Strength comes from the details- and with young horses it's all about making the details fun.

Flair is skipping right along.

Under saddle she's powerful and does whatever you want her to do, no matter how green.  For a mare that has had about 30 rides at this point, she's incredibly straightforward. She picked up changes (really accidentally) easily, and is schooling good lateral work. She's been off property a handful of times now, most recently to Meadow Lake and  Masterson Station to go school in the arenas some of the cross country, go see the dressage arenas, start thinking about tests and go for a walk.


Flair is on a similar schedule as Haiku, three days of riding and three days of lunging, which has been upped from her bare-bones winter schedule, and she's blossomed for it.

It's easy to forget that while physically she's older, but in reality she has less rides collectively than her three-year-old counterpart. The focus really has been to get her up to speed for the age group while developing strength. Her focus and capacity for work is huge, but because of the heat, and lack of strength she tires out. So we're especially careful not to burn out and create negative experiences.

We know this year is out for the FEI five year olds, so the focus is the six with a large late summer and fall schedule.

I love your approach to both girls and getting the best groundings for them so they enjoy the career path ahead.